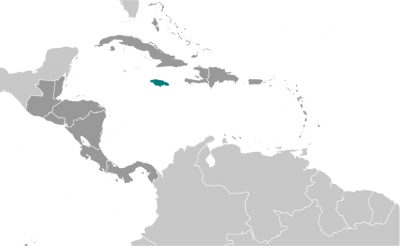 The island – discovered by Christopher COLUMBUS in 1494 – was settled by the Spanish early in the 16th century. The native Taino, who had inhabited Jamaica for centuries, were gradually exterminated and replaced by African slaves. England seized the island in 1655 and established a plantation economy based on sugar, cocoa, and coffee. The abolition of slavery in 1834 freed a quarter million slaves, many of whom became small farmers. Jamaica gradually increased its independence from Britain. In 1958 it joined other British Caribbean colonies in forming the Federation of the West Indies. Jamaica withdrew from the Federation in 1961 and gained full independence in 1962. Deteriorating economic conditions during the 1970s led to recurrent violence as rival gangs affiliated with the major political parties evolved into powerful organized crime networks involved in international drug smuggling and money laundering. Violent crime, drug trafficking, and poverty pose significant challenges to the government today. Nonetheless, many rural and resort areas remain relatively safe and contribute substantially to the economy.

Economy: The Jamaican economy is heavily dependent on services, which accounts for more than 70% of GDP. The country derives most of its foreign exchange from tourism, remittances, and bauxite/alumina. Earnings from remittances and tourism each account for 14% and 20% of GDP, while bauxite/alumina exports have declined to less than 5% of GDP.

Jamaica’s economy has grown on average less than 1% a year for the last three decades and many impediments remain to growth: a bloated public sector which crowds out spending on important projects; high crime and corruption; red-tape; and a high debt-to-GDP ratio. Jamaica, however, has made steady progress in reducing its debt-to-GDP ratio from a high of almost 150% in 2012 to less than 110% in 2017, in close collaboration with the International Monetary Fund (IMF). The current IMF Stand-By Agreement requires Jamaica to produce an annual primary surplus of 7%, in an attempt to reduce its debt burden below 60% by 2025.

Economic growth reached 1.6% in 2016, but declined to 0.9% in 2017 after intense rainfall, demonstrating the vulnerability of the economy to weather-related events. The HOLNESS administration therefore faces the difficult prospect of maintaining fiscal discipline to reduce the debt load while simultaneously implementing growth inducing policies and attacking a serious crime problem. High unemployment exacerbates the crime problem, including gang violence fueled by advanced fee fraud (lottery scamming) and the drug trade.