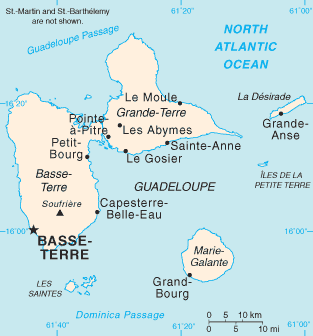 Economy: The Caribbean economy depends on agriculture, tourism, light industry, and services. It also depends on France for large subsidies and imports. Tourism is a key industry, with most tourists from the US; an increasingly large number of cruise ships visit the islands. The traditional sugarcane crop is slowly being replaced by other crops, such as bananas (which now supply about 50% of export earnings), eggplant, and flowers. Other vegetables and root crops are cultivated for local consumption, although Guadeloupe is still dependent on imported food, mainly from France. Light industry features sugar and rum production. Most manufactured goods and fuel are imported. Unemployment is especially high among the young. Hurricanes periodically devastate the economy.

The Presidency of the Asset Recovery Inter-Agency Network for the Caribbean rotates annually among member states. In [...]

A former member of the Parliament of Barbados has been arrested in Florida on conspiracy and money [...]