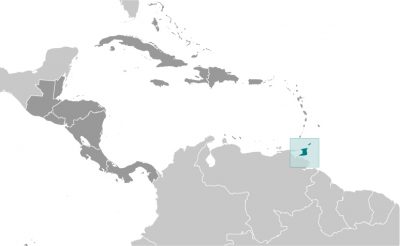 First colonized by the Spanish, the islands came under British control in the early 19th century. The islands’ sugar industry was hurt by the emancipation of the slaves in 1834. Manpower was replaced with the importation of contract laborers from India between 1845 and 1917, which boosted sugar production as well as the cocoa industry. The discovery of oil on Trinidad in 1910 added another important export. Independence was attained in 1962. The country is one of the most prosperous in the Caribbean thanks largely to petroleum and natural gas production and processing. Tourism, mostly in Tobago, is targeted for expansion and is growing. The government is struggling to reverse a surge in violent crime.

Economy: Trinidad and Tobago relies on its energy sector for much of its economic activity, and has one of the highest per capita incomes in Latin America. Economic growth between 2000 and 2007 averaged slightly over 8% per year, significantly above the regional average of about 3.7% for that same period; however, GDP has slowed down since then, contracting during 2009-12, making small gains in 2013 and contracting again in 2014-17. Trinidad and Tobago is buffered by considerable foreign reserves and a sovereign wealth fund that equals about one-and-a-half times the national budget, but the country is still in a recession and the government faces the dual challenge of gas shortages and a low price environment. Large-scale energy projects in the last quarter of 2017 are helping to mitigate the gas shortages.

Energy production and downstream industrial use dominate the economy. Oil and gas typically account for about 40% of GDP and 80% of exports but less than 5% of employment. Trinidad and Tobago is home to one of the largest natural gas liquefaction facilities in the Western Hemisphere. The country produces about nine times more natural gas than crude oil on an energy equivalent basis with gas contributing about two-thirds of energy sector government revenue. The US is the country’s largest trading partner, accounting for 28% of its total imports and 48% of its exports.

Economic diversification is a longstanding government talking point, and Trinidad and Tobago has much potential due to its stable, democratic government and its educated, English speaking workforce. The country is also a regional financial center with a well-regulated and stable financial system. Other sectors the Government of Trinidad and Tobago has targeted for increased investment and projected growth include tourism, agriculture, information and communications technology, and shipping. Unfortunately, a host of other factors, including low labor productivity, inefficient government bureaucracy, and corruption, have hampered economic development.

Good day Colleagues, As you may be aware, the current Presidency of ARIN-CARIB resides in Trinidad and Tobago.  The representatives are Joan Honore-Paul, Deputy Director [...]

The Presidency of the Asset Recovery Inter-Agency Network for the Caribbean rotates annually among member states. In 2018, the Presidency was held by St. [...]