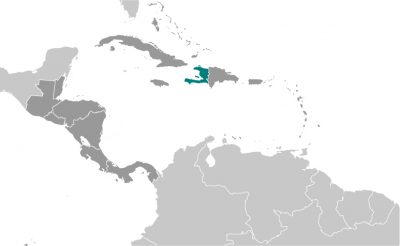 The native Taino – who inhabited the island of Hispaniola when Christopher COLUMBUS first landed on it in 1492 – were virtually wiped out by Spanish settlers within 25 years. In the early 17th century, the French established a presence on Hispaniola. In 1697, Spain ceded to the French the western third of the island, which later became Haiti. The French colony, based on forestry and sugar-related industries, became one of the wealthiest in the Caribbean but relied heavily on the forced labor of enslaved Africans and environmentally degrading practices. In the late 18th century, Toussaint L’OUVERTURE led a revolution of Haiti’s nearly half a million slaves that ended France’s rule on the island. After a prolonged struggle, Haiti became the first country in the world led by former slaves after declaring its independence in 1804, but it was forced to pay an indemnity to France for more than a century and was shunned by other countries for nearly 40 years. Currently the poorest country in the Western Hemisphere, Haiti continues to experience bouts of political instability. A massive magnitude 7.0 earthquake struck Haiti in January 2010 with an epicenter about 25 km (15 mi) west of the capital, Port-au-Prince. Estimates are that over 300,000 people were killed and some 1.5 million left homeless. The earthquake was assessed as the worst in this region over the last 200 years.

Economy: Haiti is a free market economy with low labor costs and tariff-free access to the US for many of its exports. Two-fifths of all Haitians depend on the agricultural sector, mainly small-scale subsistence farming, which remains vulnerable to damage from frequent natural disasters. Poverty, corruption, vulnerability to natural disasters, and low levels of education for much of the population represent some of the most serious impediments to Haiti’s economic growth. Remittances are the primary source of foreign exchange, equivalent to more than a quarter of GDP, and nearly double the combined value of Haitian exports and foreign direct investment.

Currently the poorest country in the Western Hemisphere, with close to 60% of the population living under the national poverty line, Haiti’s GDP growth rose to 5.5% in 2011 as the Haitian economy began recovering from the devastating January 2010 earthquake that destroyed much of its capital city, Port-au-Prince, and neighboring areas. However, growth slowed to below 2% in 2015 and 2016 as political uncertainty, drought conditions, decreasing foreign aid, and the depreciation of the national currency took a toll on investment and economic growth. Hurricane Matthew, the fiercest Caribbean storm in nearly a decade, made landfall in Haiti on 4 October 2016, with 140 mile-per-hour winds, creating a new humanitarian emergency. An estimated 2.1 million people were affected by the category 4 storm, which caused extensive damage to crops, houses, livestock, and infrastructure across Haiti’s southern peninsula.

US economic engagement under the Caribbean Basin Trade Partnership Act (CBTPA) and the 2008 Haitian Hemispheric Opportunity through Partnership Encouragement Act (HOPE II) have contributed to an increase in apparel exports and investment by providing duty-free access to the US. The Haiti Economic Lift Program (HELP) Act of 2010 extended the CBTPA and HOPE II until 2020, while the Trade Preferences Extension Act of 2015 extended trade benefits provided to Haiti in the HOPE and HELP Acts through September 2025. Apparel sector exports in 2016 reached approximately $850 million and account for over 90% of Haitian exports and more than 10% of the GDP.

Investment in Haiti is hampered by the difficulty of doing business and weak infrastructure, including access to electricity. Haiti’s outstanding external debt was cancelled by donor countries following the 2010 earthquake, but has since risen to $2.6 billion as of December 2017, the majority of which is owed to Venezuela under the PetroCaribe program. Although the government has increased its revenue collection, it continues to rely on formal international economic assistance for fiscal sustainability, with over 20% of its annual budget coming from foreign aid or direct budget support.

The Presidency of the Asset Recovery Inter-Agency Network for the Caribbean rotates annually among member states. In 2020-21, [...]