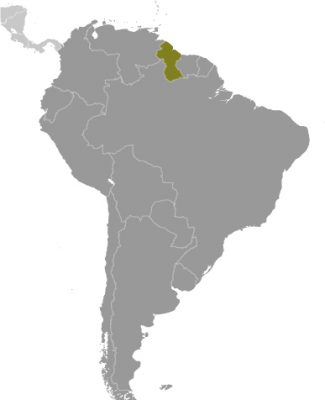 Originally a Dutch colony in the 17th century, by 1815 Guyana had become a British possession. The abolition of slavery led to settlement of urban areas by former slaves and the importation of indentured servants from India to work the sugar plantations. The resulting ethnocultural divide has persisted and has led to turbulent politics. Guyana achieved independence from the UK in 1966, and since then it has been ruled mostly by socialist-oriented governments. In 1992, Cheddi JAGAN was elected president in what is considered the country’s first free and fair election since independence. After his death five years later, his wife, Janet JAGAN, became president but resigned in 1999 due to poor health. Her successor, Bharrat JAGDEO, was elected in 2001 and again in 2006. Early elections held in May 2015 resulted in the first change in governing party and the replacement of President Donald RAMOTAR by current President David GRANGER.

Economy: The Guyanese economy exhibited moderate economic growth in recent years and is based largely on agriculture and extractive industries. The economy is heavily dependent upon the export of six commodities – sugar, gold, bauxite, shrimp, timber, and rice – which represent nearly 60% of the country’s GDP and are highly susceptible to adverse weather conditions and fluctuations in commodity prices. Guyana closed or consolidated several sugar estates in 2017, reducing production of sugar to a forecasted 147,000 tons in 2018, less than half of 2017 production. Much of Guyana’s growth in recent years has come from a surge in gold production. With a record-breaking 700,000 ounces of gold produced in 2016, Gold production in Guyana has offset the economic effects of declining sugar production. In January 2018, estimated 3.2 billion barrels of oil were found offshore and Guyana is scheduled to become a petroleum producer by March 2020.

Guyana’s entrance into the Caricom Single Market and Economy in January 2006 broadened the country’s export market, primarily in the raw materials sector. Guyana has experienced positive growth almost every year over the past decade. Inflation has been kept under control. Recent years have seen the government’s stock of debt reduced significantly – with external debt now less than half of what it was in the early 1990s. Despite these improvements, the government is still juggling a sizable external debt against the urgent need for expanded public investment. In March 2007, the Inter-American Development Bank, Guyana’s principal donor, canceled Guyana’s nearly $470 million debt, equivalent to 21% of GDP, which along with other Highly Indebted Poor Country debt forgiveness, brought the debt-to-GDP ratio down from 183% in 2006 to 52% in 2017. Guyana had become heavily indebted as a result of the inward-looking, state-led development model pursued in the 1970s and 1980s. Chronic problems include a shortage of skilled labor and a deficient infrastructure.