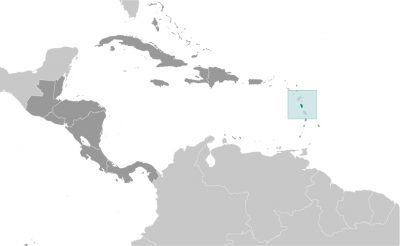 Dominica was the last of the Caribbean islands to be colonized by Europeans due chiefly to the fierce resistance of the native Caribs. France ceded possession to Great Britain in 1763, which colonized the island in 1805. In 1980, two years after independence, Dominica’s fortunes improved when a corrupt and tyrannical administration was replaced by that of Mary Eugenia CHARLES, the first female prime minister in the Caribbean, who remained in office for 15 years. On 18 September 2017, Hurricane Maria passed over the island causing extensive damage to structures, roads, communications, and the power supply, and largely destroying critical agricultural areas.

Economy: The Dominican economy was dependent on agriculture – primarily bananas – in years past, but increasingly has been driven by tourism, as the government seeks to promote Dominica as an “ecotourism” destination. However, Hurricane Maria, which passed through the island in September 2017, destroyed much of the country’s agricultural sector and caused damage to all of the country’s transportation and physical infrastructure. Before Hurricane Maria, the government had attempted to foster an offshore financial industry and planned to sign agreements with the private sector to develop geothermal energy resources. At a time when government finances are fragile, the government’s focus has been to get the country back in shape to service cruise ships. The economy contracted in 2015 and recovered to positive growth in 2016 due to a recovery of agriculture and tourism. Dominica suffers from high debt levels, which increased from 67% of GDP in 2010 to 77% in 2016. Dominica is one of five countries in the East Caribbean that have citizenship by investment programs whereby foreigners can obtain passports for a fee and revenue from this contribute to government budgets.