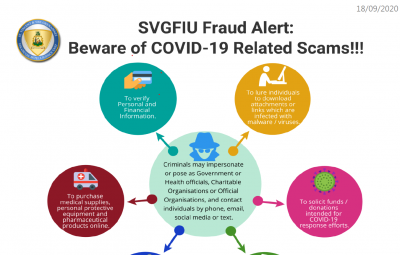 The Financial Intelligence Unit of St. Vincent and the Grenadines have adopted a proactive strategy in tackling serious crimes specifically relating to fraudulent and pyramid  schemes and scams. The Financial Intelligence Unit in collaboration with the Financial Services Authority created and published advisories and news releases filled with information and  guidance on specific and general fraudulent schemes.  The Competent Authorities in St. Vincent and the Grenadines took further steps to become the first country in the Eastern Caribbean to successfully promulgate legislation addressing pyramid schemes,  and fraudulent ponzi schemes through the enactment of the Consumer Protection Act.

The advisories arose due to heavily marketed pyramid schemes through social websites and other means.  Most of these schemes require new persons to join groups and make an initial contribution of money with the promise of a significant pay-out or “return” on their contribution at a later date. The schemes rely on the recruitment of new members in order to ensure high pay-outs . They operate as profit making operations. The schemes are commonly misunderstood and inaccurately marketed as “sou-sou”– arrangements. They are not considered “Sou-Sou” as such arrangements do not operate to make a profit and does not require new entrants to sustain it. Contrastingly, in these schemes  early contributors to the scheme are paid from the money contributed by newer members while existing are constantly motivated and encouraged to recruit new persons so that they can move to a different “level” or “circle” where they will obtain higher returns on their contribution.  The more persons solicited by members the higher their returns. The success of the  schemes depends on the number of members.  it collapses and disappears along with the payment platform and the money that was ‘invested.’

Please find the links to the documents and advisories below.